Highlights from the program include:

Vice President Exploration Irvine Annesley says “Continuing to find new occurrences of visible and massive monazite on the Alces lake property show the property’s amazing potential. Multiple results exceeding one percent total rare earth oxides from new targets, not explored before 2022, tells us we are just scratching the surface at Alces Lake. With so much area left to explore we are excited about what remains to be discovered and new targets to be drilled”.

Following up on the success of Appia’s 2021 geological field work, a team of two field geologists conducted reconnaissance prospecting of previously unexplored or underexplored radiometric Th (and U) anomalies during the 2022 field season. The team documented 13 new occurrences of visible monazite across the central portion of the Alces Lake property. Grab samples of anomalously radioactive bedrock were collected whenever possible. Of 34 outcrop grab samples, four returned grades exceeding 2 weight percent Total Rare Earth Oxides (wt.% TREO) and greater than half exceeded 0.1 wt.% TREO.

With another successful year following up on the results of Alces Lake 2021 airborne radiometric survey, Appia has engaged a geophysical contractor to expand the survey coverage to all of the 35,682-hectare Alces Lake property.

Appia CEO Tom Drivas said “The 2022 prospecting results have shown just how effective and valuable a tool the airborne radiometric data is. After the 2021 survey guided our team to excellent results from new targets for the second season in a row, including the stunning 36.11 wt.% TREO sample in the West Limb, we have decided to expand the survey to cover the entire property. This is an important step for unlocking the full potential of Alces Lake as part of an emerging Rare Earth Elements district”. 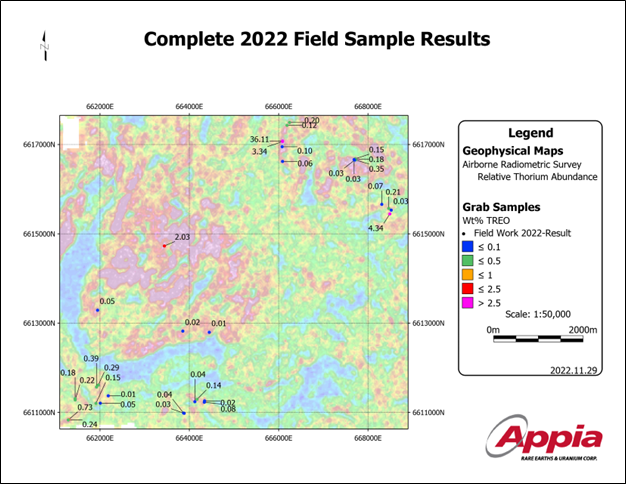 Figure 1. Results and locations of 2022 prospecting sampling. Point labels identify the calculated wt.% TREO of each outcrop grab sample, as further elaborated on in Table 1 below. 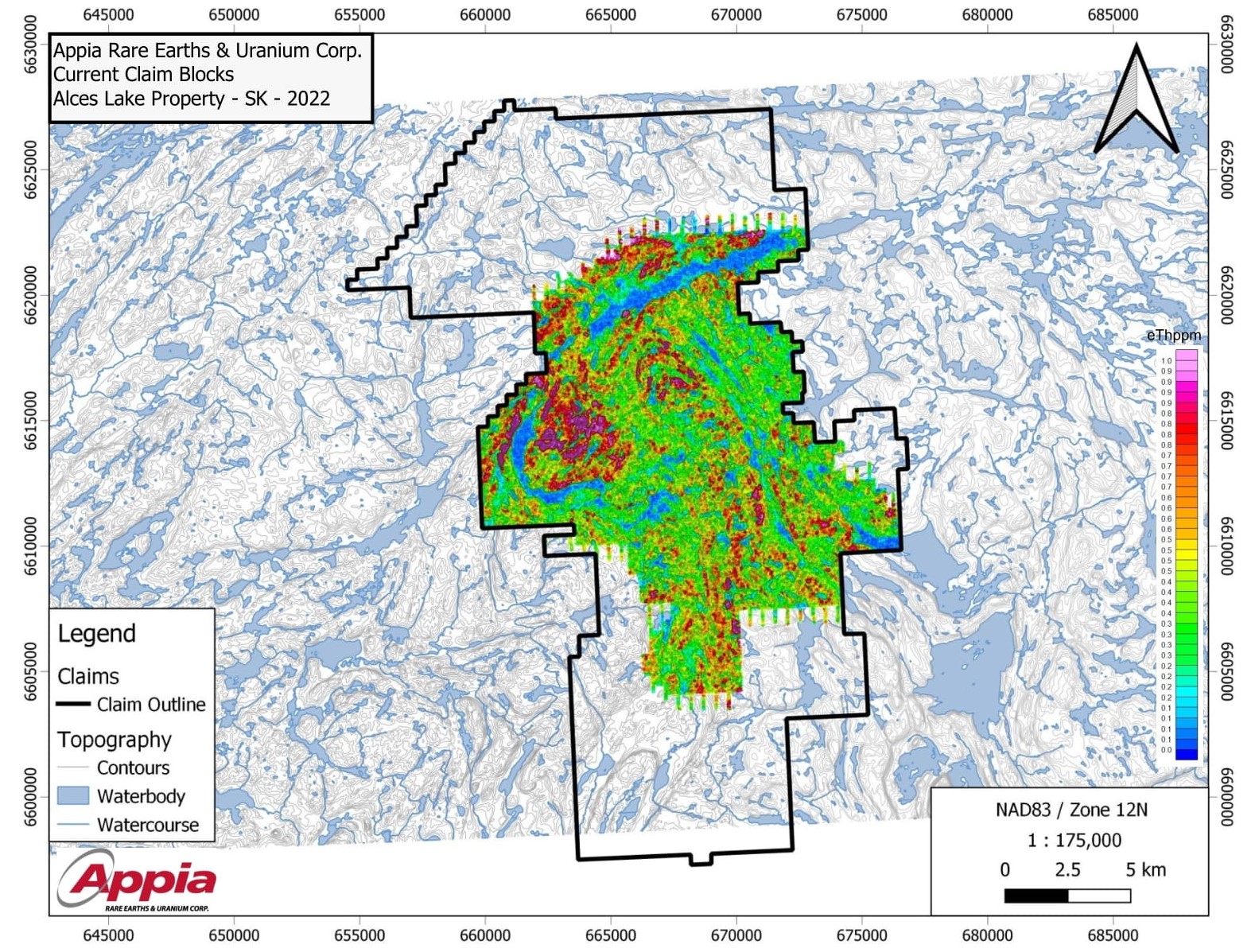 Figure 2. Current coverage of airborne radiometrics at Alces Lake. Appia has engaged a geophysical contractor to extend the survey to the complete extents of the claim group at the beginning of the 2023 work program.

About the Alces Lake Project

The Alces Lake project encompasses some of the highest-grade total and critical* REEs and gallium mineralization in the world, hosted within several surface and near-surface monazite occurrences that remain open at depth and along strike.

* Critical rare earth elements are defined here as those that are in short-supply and high-demand for use in permanent magnets and modern electronic applications such as electric vehicles and wind turbines (i.e: neodymium (Nd), praseodymium (Pr), dysprosium (Dy) and terbium (Tb)).

Appia resumed drilling at Alces Lake in mid-March 2022, with significantly deeper holes compared to the 100 holes (approximately 8,076 metres) drilled in 2021. Total meterage in 2022 was 17,481. This was designed to allow Appia to determine continuity at depth and along the identified REE mineralization trends as the Company works towards an initial resource estimate in accordance with NI 43-101 for the area. With high-grade REE mineralization now identified in many locations within an area covering approximately 27 km2 of the Alces Lake block. the Company believes the project has the potential to be a world-class source of high-grade critical rare earth bearing monazite.

The Alces Lake project is located in northern Saskatchewan, the same provincial jurisdiction that is developing a “first-of-its-kind” rare earth processing facility in Canada (currently under construction by the Saskatchewan Research Council, with the first stage scheduled to become operational in early 2023). The Alces Lake project area is 35,682 hectares (88,173 acres) in size and is 100% owned by Appia.

To ensure safe work conditions are met for the workforce, the Company has developed exploration guidelines that comply with the Saskatchewan Public Health Orders and the Public Health Order Respecting the Northern Saskatchewan Administration District in order to maintain social distancing and help prevent the transmission of COVID-19.

Grab samples were collected with the use of a rock hammer where possible and sample selection location was determined by the use of handheld scintillometer. The area of highest scintillometer readings may or may not have been sampled. All lithogeochemical assay results of grab samples were provided by Saskatchewan Research Council’s Geoanalytical Laboratory, an ISO/IEC 17025:2005 (CAN-P-4E) certified laboratory in Saskatoon, SK. All analytical results reported herein have passed internal QA/QC review and compilation.

The technical content in this news release was reviewed and approved by Dr. Irvine R. Annesley, P.Geo., Vice President Exploration of Appia and a Qualified Person as defined by National Instrument 43-101.

Appia is a publicly traded Canadian company in the rare earth element and uranium sectors. The Company is currently focusing on delineating high-grade critical rare earth elements and gallium on the Alces Lake property, as well as exploring for high-grade uranium in the prolific Athabasca Basin on its Otherside, Loranger, North Wollaston, and Eastside properties. The Company holds the surface rights to exploration for 110,997 hectares (274,280 acres) in Saskatchewan. The Company also has a 100% interest in 12,545 hectares (31,000 acres), with rare earth element and uranium deposits over five mineralized zones in the Elliot Lake Camp, Ontario.

Cautionary Note Regarding Forward-Looking Statements: This News Release contains forward-looking statements which are typically preceded by, followed by or including the words “believes”, “expects”, “anticipates”, “estimates”, “intends”, “plans” or similar expressions. Forward-looking statements are not a guarantee of future performance as they involve risks, uncertainties and assumptions. We do not intend and do not assume any obligation to update these forward- looking statements and shareholders are cautioned not to put undue reliance on such statements.

Neither the Canadian Securities Exchange nor its Market Regulator (as that term is defined in the policies of the CSE) accepts responsibility for the adequacy or accuracy of this release.